Nearly two decades later there is not one room in our house that does not have boxes.  Some are full, many more yet to be taped up for use. And there are no professional movers in sight, at least not yet. In fact, the nature of this change is that we know where we are moving, and why, but we don’t exactly know when. There are scores of shifting parts to synchronize. Everything may come together tomorrow, or it may be a couple more months. For a planner like me this is the ultimate challenge.

My home office has become “moving central.” It is where all the supplies are kept and where boxes come on their way to the garage. Furniture being given away or sold rests in my office until the new owner comes to claim it. And yes, I still carry out my job functions in this room.  My little corner counter holds my computers and Bibles. Active work projects are strategically placed so my back is to the moving madness and my eyes catch the beauty outdoors.

But that’s not the best part. If you were to walk in to my office now you might remark as most people do, “You still have a puzzle set up in the middle of all this?” 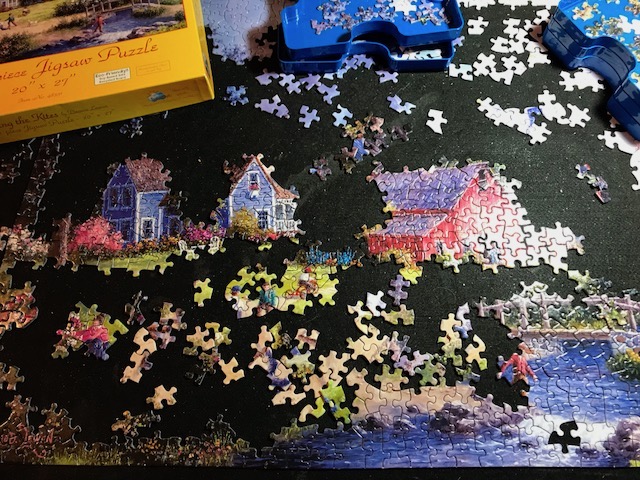 I started this puzzle before my office took on the packing motif. As the piles grew around it I thought about giving up on the puzzle. Only partly because of space. There was also the fact that I was stuck. There were too many similar colors, and strangely shaped pieces. I wanted to call it quits.

But I couldn’t. Somehow, I felt that if I could walk in and see that puzzle, a favorite form of relaxation for me (even when stuck), all was ok. I needed the mental picture that my life did not have to be consumed by the myriad of details swirling around and inside me. It is a visual of peace to me in what often feels like a raging storm. I wish I could say I acted on that thought and took some breaks, but I didn’t. . . until my ten-year-old neighbor came over.

Becca saw the puzzle and noted it wasn’t any further along than the last time she visited. Since the next day had already been called a snow day she came over to help me.

For an hour, Becca and I worked the puzzle and shared our lives with one another.  Together we got past the hurdle of “none of these pieces fit together!”  Becca’s company and help inspired me so much that the next night I decided to not tend to any moving, household or work tasks.  Instead I spent several hours puzzling. This time not about how to get everything done, but real jigsaw puzzling.

The puzzle is not yet complete, but I moved it forward from about 40% finished to about 80% done. More importantly, I was reminded that a beautiful puzzle picture is 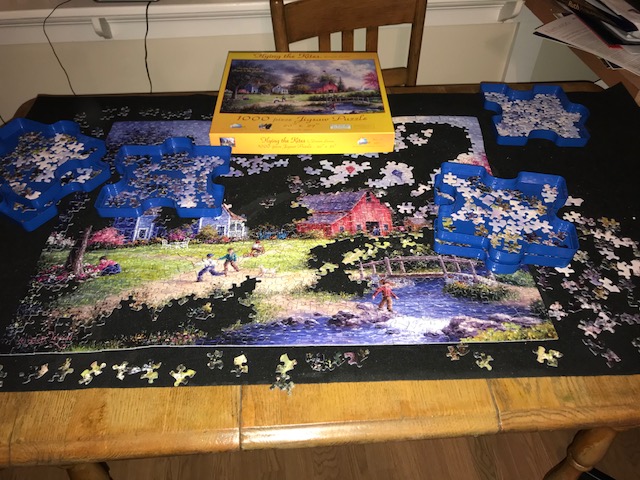 made up of thousands of small, some very odd shaped, pieces. It may take some time, but as each piece is placed where it belongs the picture becomes clearer.

That puzzle is a picture of my life right now. No not the idyllic country scene with kids flying kites, dogs running and ladies gardening.  Rather, the thousands of pieces of our life and move will come together in God’s timing, and what an incredible masterpiece they will make. As much as I love to make lists and want every detail accomplished tomorrow (though yesterday would be preferable), that is not the path God has me on right now.

I look forward to the day when the pieces that now look like they will never fit anywhere will someday click and I’ll exclaim, “oh, that’s where that was supposed to go.” Thank you, God, that your picture is grander than anything I try to piece together.