It had to happen sometime – but now???

Friday I drove home from two amazing weeks of serving as the Assistant Director at Joni and Friends Family Retreats.  I had the opportunity to confront and work through some challenging situations over the two weeks, yet, coming home to find a dead bird was the “straw that broke the camel’s back” – at least emotionally!

Here’s the back story. . . returning home this weekend marks the one year anniversary of the last time I came home and was met by Mom when she was feeling mostly normal, though signs of her being seriously ill were rapidly building.  Just 3 1/2 weeks later she was with Jesus.  Throughout this last year of grieving and learning a new normal, I have periodically commented that I do not know what I will do when there is a dead animal in our yard.  Mom often thought I was strong, but really she was the tough one.  Yes I admit that even at age 50 plus I would “let” (translate beg!) my 86 year old Mother be the one to remove a dead bird or mouse that was outside.  In fact just a few weeks before she got sick she helped a police office remove a dead skunk from the middle of the road!

So it happened – and of course it had to be at an anniversary mark.  As I put my car in the garage I noticed that my blueberry bush was filled with ripe berries.  I grabbed a container and began thinking of how great the blueberries would taste and different ways we could enjoy them.  As I got to the bush I saw it – a robin lying dead on the edge of the garden in front of the bush.

So I did what I always do in this situation – I retreated to the house and freaked out!  Then I tried to rally my rational strong woman self and thought, “This is ridiculous, it’s a dead bird – go get it and move on with the berries.  If Mom could do it, you can!”  So I wrapped a plastic bag around a pair of Jerry’s grabbers (another advantage to having a husband with a disability) and ventured back to the garden.  I rolled the trash can right there, so once I picked it up I could drop it in. I took a few deep breaths, and made my first attempt with the grabbers.  It was then I realized the bird was caught in the netting over the blueberry bush (yes the very net put there to discourage birds from eating my berries!).

I shuddered, cried and was overwhelmed by “I can’t do this!”.  I paced back and forth looking up and down the street to see if any neighbors were out who could help me.  There were none so I retreated back to the comfort of my home and lost it – I mean full blown sobbing that I could not deal with a dead bird – and that I knew this would happen some day – but why did it have to be now when I was already grieving Mom at this anniversary time.

After a few minutes (that felt like hours) Jerry pulled in the driveway.  Not wanting to greet him with a tearful sobbing wife, I waited till he came in the house.  Little did I know he would bring our 9 and 6 year old neighbor kids with him who were delivering our mail gathered while we were away.  I quickly turned my head away and tried to gather my composure.

After they left I broke out in tears again telling Jerry what a “wuss” I am and poured out the story.  He too went in search of a neighbor to help, to no avail.

So I did what all strong women do – I took a nap!

When I woke up my sister and her family had arrived.  My first words were asking for help from my brother-in-law.  Thankfully he and my niece Valerie had the fortitude to do what I could not do. With gratitude I went to pick the berries (and remove the remainder of the netting so it was not a death trap again). 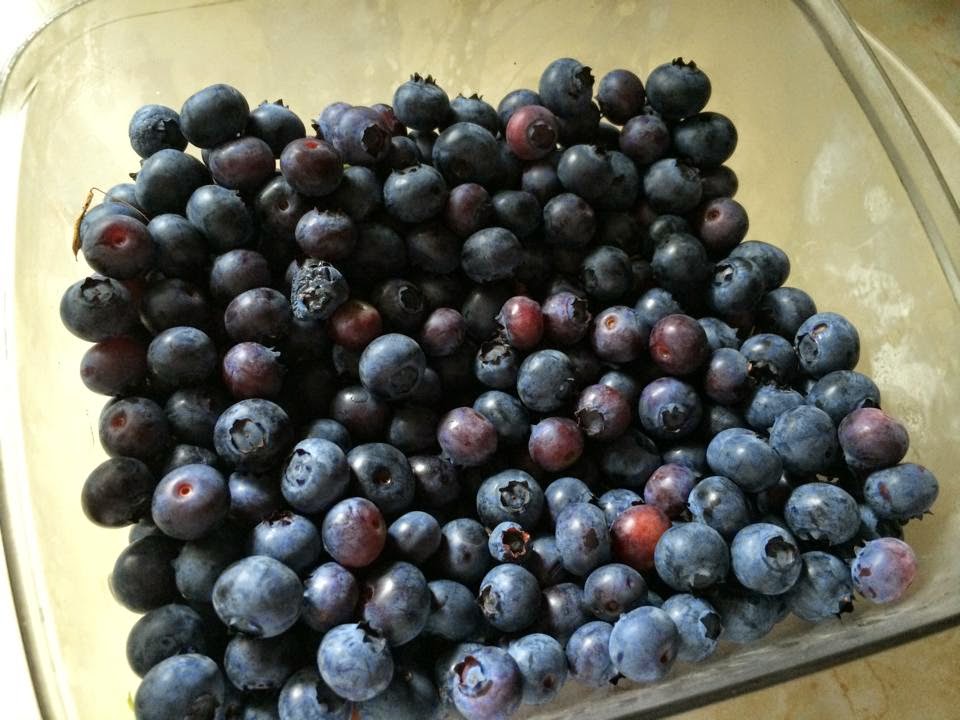 Today I enjoy the berries, thank God for my family and fall on His mercy and grace to carry me through these next days and weeks.