I’ve Got Your Back!

Last week while driving to my first appointment of the day I inadvertently incited road rage in someone.  I wanted to change lanes and looked (twice in fact!) to make sure there was no one in the lane, or in my blind spot.  Seeing none, I began to change lanes when I heard a horn beep.  I looked again and did not see anyone so finished the lane change (assuming the horn was directed towed someone else).  Then the horn was “laid on” to clearly let me know it was meant for me.  I don’t know where the car was when I looked, (they may have turned out of a parking lot at the same time I was changing lanes).  Regardless of where they came from I realized I missed seeing them.  Perhaps you’ve noticed there really isn’t a good way to let another driver know you realized your mistake.  I tried to wave gently indicating that I was wrong and was sorry.  Either he couldn’t pick up that was the meaning I meant to convey or he didn’t care. Meanwhile I was simply grateful that no person or property was injured or hurt.

As I continued down the road I looked back a time or two to see if the person was still behind me.  He drove a car that looked similar to others on the road (I am not one to know car details).  About 2 miles after hearing the horn I stopped for a red light.  While waiting I heard an unusual sound behind my car and looked in the rear view mirror – just in time to see the man swing his jacket (which I think he had over his head) and walk back to his car.  The light turned green.

I thought it odd and then noticed that there was a “sticker” on my rear window.  I found a safe place to pull into a 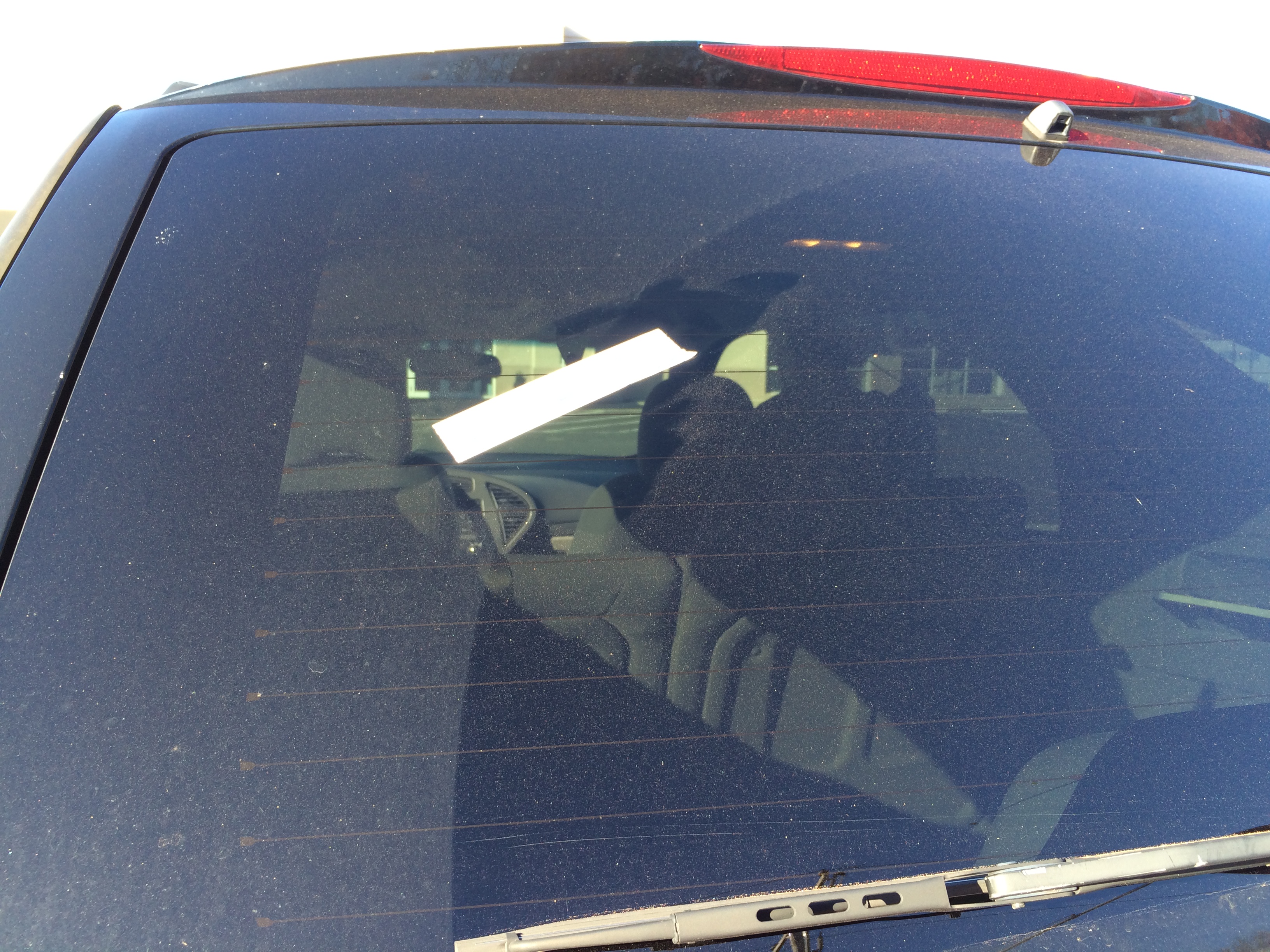 public parking  lot, thankful that the driver had turned off and did not follow e.  I got out of my car and read the note he left me.  Let’s just say that he identified me by a name that is not a typical part of my vocabulary and shared his thoughts on how I could improve my driving.

I took the sticker off my car, got back inside my car and cried!  I think I was just shaken that I was trying to be safe, and felt violated by his actions, though I am glad that a sticker was all he had on hand – and nothing more aggressive. I called my hubby.  I assured him I was fine, but needed to tell him what happened.  Because I wasn’t that far from home he suggested I come home for a few minutes.

Driving home I found myself praying for the driver.  I have no idea who he is, and likely never will.  But that man must have had a tough morning, or live with a great deal of anger, pain or pressure to respond in such a manner.  I asked God to blessed with peace and smiles from people throughout the day; and that he would encounter Jesus and know His de
ep love for him.

A few minutes to be held by husband and have him pray for me as I reentered my day was just what I needed.

Back into my car, and on the road again I found myself looking around at all the drivers and praying.  I noticed one of the cars on the road carried two men I know from church.  We waved to each other and smiled.  As i got to the area where earlier that morning I had the unpleasant encounter, the car carrying these two brothers in Christ changed lanes and followed me, for the next couple of miles until they turned off the road.

I smiled and grinned as I thanked God.  It’s just like Him to show up in a way I can’t help but see to remind me that “He’s got my back” and I am never out of range of His care.