The Story of Jerry, Joan and Joni Part 1

Three of the questions I am most frequently asked:

Questions 1 and 2 are relatively easy to answer (in the opposite order), and number three takes a little more explanation. So perhaps it is time to put the story of Jerry, Joan and Joni in writing. Though really it is the story of “J to the fourth power” – Jesus, Joni, Jerry & Joan.

In fact, that is the order in which I met them.  Clearly Jesus is the common thread between each of the other relationships.

It was in the late 80’s when I was working in northern CA (Sonoma County) in a group home for adults with developmental disabilities that I was invited to a meeting in Wisconsin. Joni Eareckson Tada was the driving force of this gathering of about 40 people who worked in disability ministries around the country. The goal was to develop a consortium of ministries to support each other and expand disability ministry. 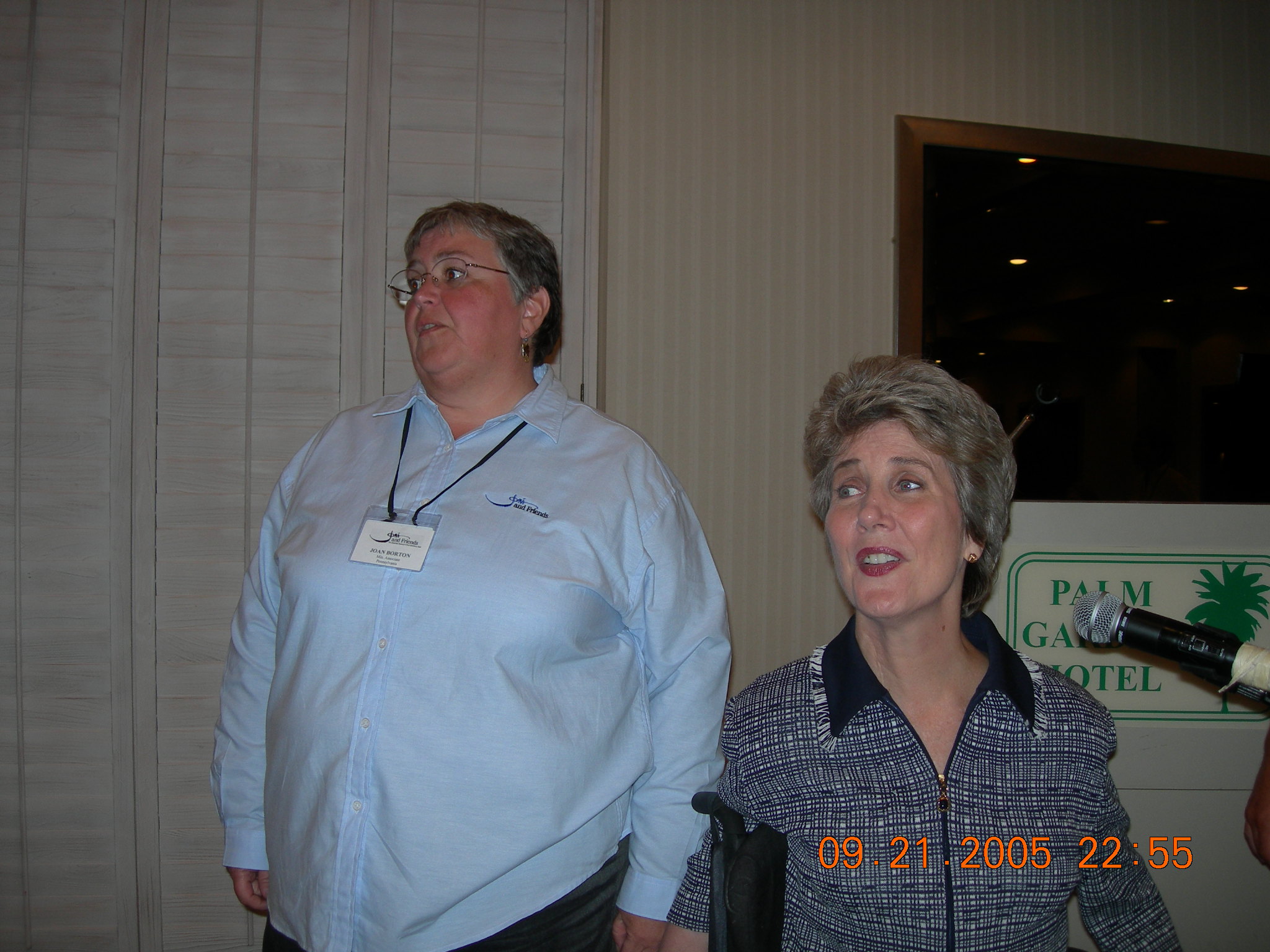 Joni and I both enjoy praising God in song. It is a joy and pleasure when she invites me to harmonize with her as we did at this conference.

The first evening we had a meet and greet prior to dinner. That was the first time I met Joni face to face. I happened to be standing next to her when for reasons I cannot remember, the person facilitating the evening announced that the first ones to identify all 5 points of Calvinism would lead the way through the dinner line. Joni and I pulled our church history and theology knowledge together and lead the way to dinner! Periodically when we are together we giggle at the memory.

Jerry was at the same conference. Both our names are on the attendee list. I recall him as someone who was funny and wore polyester (he’ll say because it made his transfers easier!). I even played piano for some of the group sessions, yet he does not remember me at all.

The following year this consortium joined Joni and Friends in an International Congress on the Church and Disability, drawing about 900 people from around the world to Grand Rapids, Michigan. Late each evening about 10 of us would gather and play UNO as we debriefed our days. Jerry and I were each a part of that little gathering. Again, I recall how funny he was; and somehow I made enough of an impression on him that he could now recall me

For the next six or eight years Jerry and I continued to attend the same conference, he coming from Indiana and me from California. As conference buddies we spent some time chatting together each gathering. Throughout the years we had some occasional ministry related communication.

It was the spring of 1994 when Joni and Friends invited both of us to a weeklong Institute they were hosting in Knoxville, Tennessee. If memory serves me correctly, about 30 of us attended that training. At the end of the week, everyone went home – except Jerry and me. Neither of us knew the other planned to stay over. Jerry stayed because he had some work to do with a college in town. I stayed as my parents came over from North Carolina to visit with me before I headed home to the west coast.

Jerry joined my parents and I for a meal or two that weekend. I remember him calling our hotel room early Saturday morning saying his attendant called out sick, did I think my Dad would go help him get up that morning. Of course, my Dad went and helped. The only thing I remember my dad saying when he came back was, “that boy needs new socks – his have holes!” (What dad didn’t understand was that those holes came from Jerry’s dressing stick that he used to pull his socks up independently).

As far as I knew, we parted at the conclusion of that weekend as we had after any other conference – conference buddies who would see each other the next year. Only later did I learn that Jerry left saying, “God, I wish there was someone like Joan in Indiana.”

Check back here on Sunday for part 2!