The Story of Jerry, Joan and Joni Part 2

At the end of that busy summer of camping ministries (which we both did) he called me at home. He didn’t declare any intentions that night – but still I knew something had changed in our conference friendship.

From August through December 1994 he would call me periodically at home. Because we had a six year friendship already under our belt these conversations quickly took our friendship deeper.

What kids! This picture was taken the weekend of our first face to face date weekend in Clarksville, IN

In March 1995 we decided it was time for a face to face visit and to meet family and friends. I flew to see Jerry in Indiana, meet his friends, and see his ministry. In April he flew out to CA to meet my friends and see my life. We got engaged that weekend. In May I met him in northwestern Ohio where he grew up. This gave me the opportunity to meet his family, friends and help with a weekend of camp Power Ministries hosted. In June he came back to northern CA and worked a week of Family Retreat I was running “on loan” to Joni and Friends from the ministry I worked with, Oaks of Hebron.

Late August Jerry’s friends and family packed his van and a trailer, which a friend of his drove to Cotati, CA to the (accessible) condo I had purchased a few years earlier. A few days later Jerry flew out. He lived in my condo and I housed with friends until we were married November 11, 1995 in Sebastopol, CA.

We lived in Cotati, CA for three years while I continued to work for Oaks of Hebron and Jerry worked for Congregational Awareness, Sonoma County Pro Life and the Redwood Gospel Mission.

In 1998 we knew we needed to move east to be closer to our parents as they aged and to make travel to our families more affordable. Through a long job search we ended up taking jobs in Fort Washington, PA. Jerry’s brother and sister flew out from Ohio and helped us make the drive across the country. My uncle and aunt came over from New Jersey to help us unpack and move into an apartment.

The jobs we came east for turned out to not be a good fit for us. But we were here, and enjoying reconnecting with extended family in the area. We worked a variety of temporary jobs, did a great deal of foster/respite care and bought a house in Souderton, PA.

At several times in both of our lives we had worked on loan or in partnership with Joni and Friends. We had both been recruited by them in the past for staff positions, but the timing was not right. We reached out again now in 2000 to Joni and Friends asking if they had any positions available for us or wanted to start a Philadelphia office. We were told that in the recent days Joni had mentioned that they needed to reconnect with the Bortons. 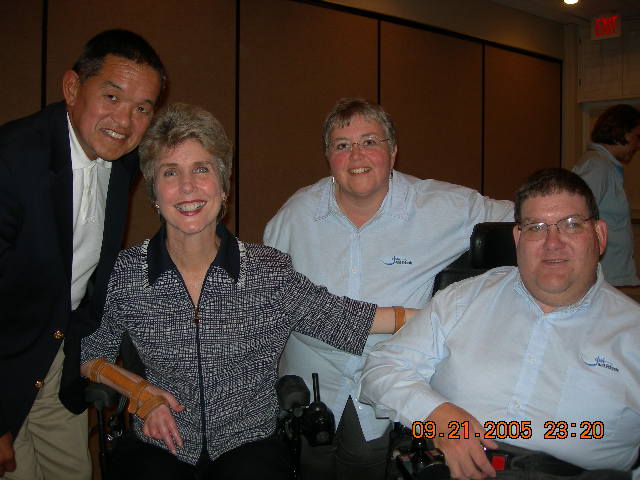 We are honored to call Ken and Joni Tada our friends, and to work as ministry partners with them.

God blessed and multiplied our work. December 31, 2006 we closed the office of Disability Ministry Associates (which was located in our home) and reopened that same office January 1, 2007 as full time employees with Joni and Friends. Jerry became the Director and I the Program Manager of Joni and Friends Greater Philadelphia (www.joniandfriends.org/greater-philadelphia).

In 2008 we moved the office out of our home to 121 E Chestnut St in Souderton PA. Later that spring we hired our first staff person, Becca, to be our administrative assistant.

Since then God has seen fit, through the generosity of many supporters, the wisdom of many advisors and the pounding on Heaven’s door of many prayer partners to grow us to a team of five full time staff, a dozen volunteers who serve on a weekly basis and hundreds more who serve throughout the year to reach into the lives of more than 400 families affected by disability and over 200 churches who serve them.