Christmas Trees and the Cross 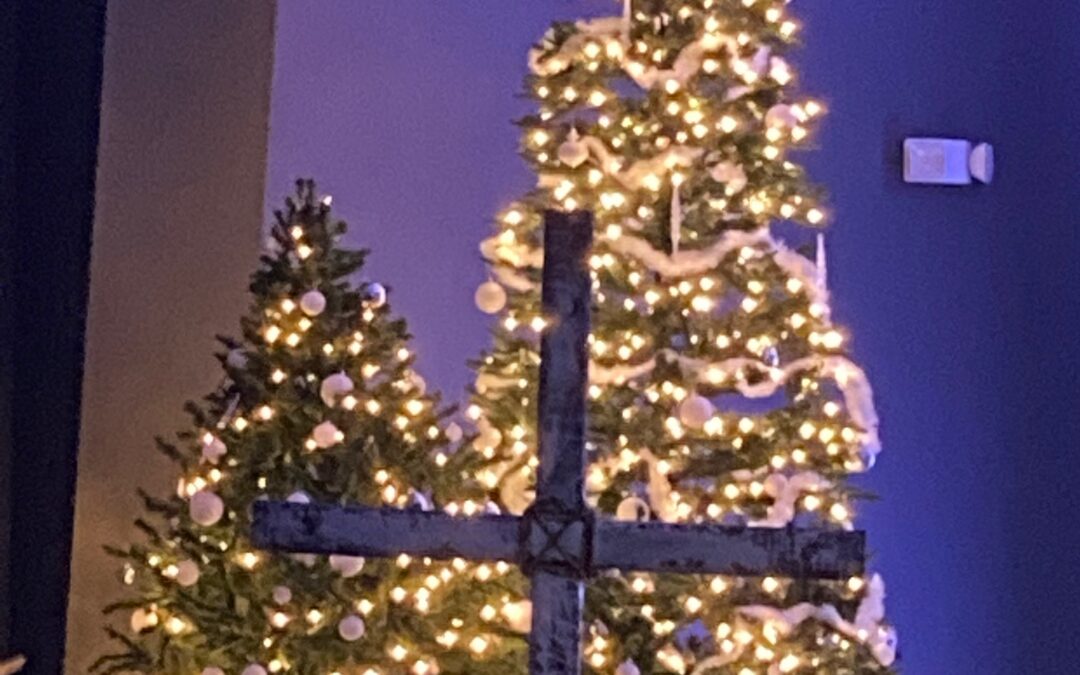 I love Christmas decorations, especially seeing the ones other people put up outside their homes. Every year, Mom and I would drive around neighborhoods to see the lights. Some were simple and striking. Others are seemingly over the top (at least in our minds) and ostentatious.

But it was the decorations in front of me at church last Sunday that got me thinking . . .

From the row in which we sat, I had a straight-on view of the cross standing on the floor, with two classically decorated trees on the stage behind it. Something about the positioning struck me. So much so I captured it in a picture.

After some pondering, it came to me. When I give a gift to someone, I try to think about what they enjoy and tailor the gift to them. For example, it’s no secret, my husband, Jerry, loves baseball. Especially the Detroit Tigers. Most people also know that he focuses intently on his work, some even call him a workaholic. Giving him a gift of baseball tickets is perfect. The stadium is one of the few places he can shut out the world around him, relax, and enjoy the game.

Whereas for me, I go to baseball games to be with him and share his passion. But a gift of tickets to a game would not mean the same to me. I love a good puzzle. It’s a perfect way for me to lose myself in activity and escape. Jerry knows I enjoy puzzles, but can barely stand to put one piece in, even if I handed him the very last one with no choice of where to put it.

Do you see where I am going? The giver of a gift considers the receiver’s personality and preferences. They have a purpose in mind for the gift they are giving.

That’s exactly the image portrayed in the cross and Christmas trees.

At Christmas, we celebrate the birth of Jesus. We think of him as the little baby in the manger. And he was . . .for a time. But when his Father God gave Jesus to us that day in Bethlehem, there was a broader purpose behind the gift.

The Giver of all good gifts knew we could never achieve His standard of perfection. Because of His extreme love for us He gave us the gift of His Son. And the amazing part is, both the Father and Son knew that the end of the Son’s earthly life would come on a cross. Not because He deserved it, but because I deserve it. And frankly, so do you.

The trees remind me II was in his mind when baby Jesus was born. And so were you. The cross was in His mind as well. Likewise, the empty tomb. The Father gave the gift of His Son for a greater purpose. Thank you for such a sacrificial gift.